This time I’ll write in English as I followed an excellent guide from Johannes Weber from Weberblogs to set up an Stratum 1 ntp timeserver with an Raspberry Pi and GPS. My blogpost is a direct "pingback", so English will be best. I think that teachers and in-company trainers with some ideas can easiely build a small project around the guide.

In my opinion it can be very suitable for apprentices in IT professions as well as all professions with an electronics background. Maybe as a small project with some pupils, too. So I wrote down my Ideas at the end of the article.

I tried Johannes setup with an RPi 4 and 5.10 kernel on an summer 2021 recent raspian os. So I followed this guide: https://weberblog.net/ntp-server-via-gps-on-a-raspberry-pi/. With some soldering (yes, I’m really out of practice…) that works nearly out of the box. Some changes I have seen due the newer operating system I will document here.

While configuring the gpsd the interface ist not /dev/AMA0 it is /dev/ttyS0 everything else with the gpsd is fine.

Johaness mentioned, to set a symbolic link to set up a service for gpsd and ntpd. That is out of date. The gpsd service as well as the ntpd service is already there, when you install from a recent raspian repositority. So after compiling the latest version of ntpd (thats a really good idea!) you’ll just have to set the package for apt-get on hold, as Johannes wrote. To enable and start the services then just type:

The enable` command makes the service start automatically after a system restart, and the `start command will start it immediately.

Then you have to make the GPS and PPS related configs in /etc/ntp.conf.

And well, it works. So far so good. Nevertheless I had to make some other changes in the standard ntpd config file /etc/ntp.conf. It may be useful for people who followed the guide, as well. Several time queries worked well until the moment as the ntp server gets some load (maybe 5 to 10 queries per second). Than the clients will get a 500 error and you’ll will see a lot of timeouts. I searched for that behavior for a while. The solution was to comment out two directives in /etc/ntp.conf. The directives kod & limited. After that the server worked as expected even with load.

Here is my hole /etc/ntp.conf file

Nginx proxyerver for ntpd – yes, you can

Furtermore I proxied the RPi4 ntp service through an nginx proxy server on an other machine. That could be interesting for all of you which don’t want to expose the whole (firewalled) RPi4 to the internet. As well you can do some load balancing if you have a lot of clients and/or more than one timeserver. In my case its because I only have one public IPv4 that I can use for my servers.

I used the nginx servers stream directive with a small custom logging format to do that. Here is my workling config (just set the proper IPs).

I highly recommend to turn of logging after you checked that all works well. The ntp is such a small protocol and the log will be huge in a couple of hours if you expose the timeserver to pool.ntp.org an get some load.

Finnaly my stratum 1 timeserver works well but is somewhat ugly. Nobody will see that, cause it lies on the ceiling and looks like that: 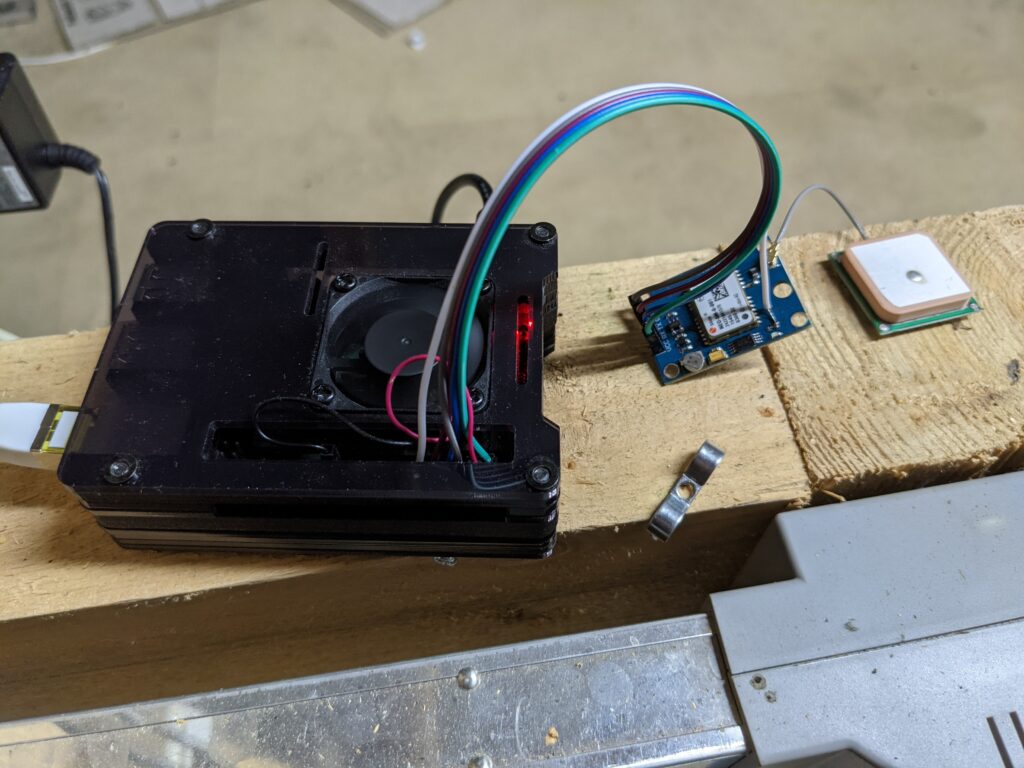 Ideas for the youngsters

So what are my ideas for the apprentices, trainees and pupils. I think you’ll will have a wide variety of possible tasks and projekts:

Where to find my server?

You can find my server via IPv4 and IPv6 with the hostname time.eldshort.de and – as well – it is included in the ntppool project within the pool de.pool.ntp.org. Right now it handles round about 10-20 queries per second with 2% system load. Due the fact that the protocol is very leightweight it uses about 10 Megayte per 90 minutes, so even with a slow internet access you can expose your timeserver without loosing bandwidth. Have fun with it.

Blogpost "Apprentice Projekt – set up a stratum 1 ntp timeserver with an RPi 4" from Ulrich Ivens is licensed under CC BY-SA 4.0.