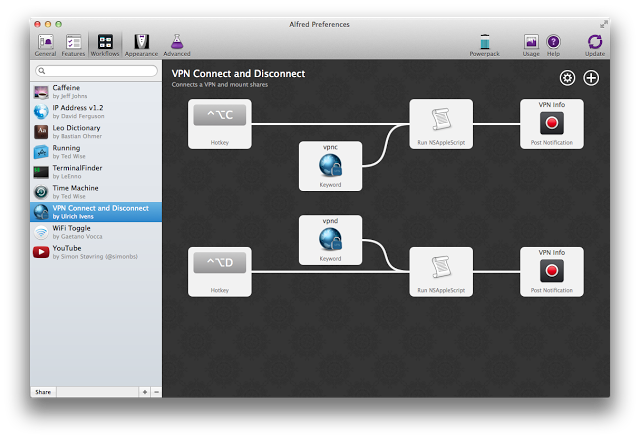 This is my first blog post in English. I will do that every time the topic is about things, that are related to an international audience.

A couple of days ago I wrote in german about my VPN connect and disconnect Alfred workflow. For all non German speaking people a short story why I had created the workflow:
Nearly every time I have to connect to my companies VPN I need the samba shares, as well. So I decided to automate connecting to VPN and mounting the shares. It is so boring to do that by hand every time. In march, I wrote about that in my blog, too (only German language). At that time I didn’t know about Alfred and I started the apple scripts with the software Butler or with a double-click. Meanwhile I only use Alfred to automate the things on my Mac. I build a workflow to connect our VPN and samba shares. An it works like a charm! The workflow I created looks that way: 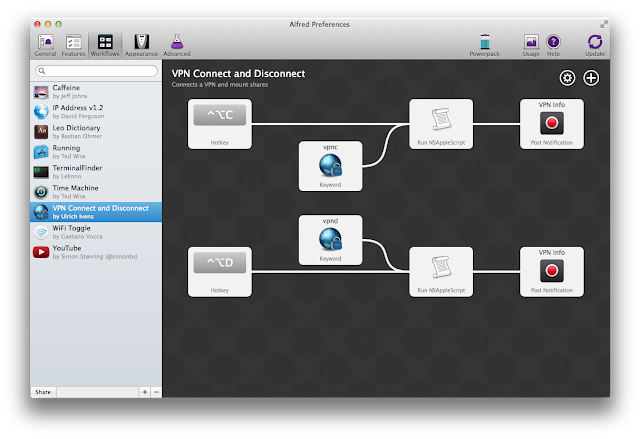 The scripts are still apple scripts, but I tried to make them more easy. To use them, simply open the scripts in Alfred and change the defined variables to your individual settings. It is well commented (in English, so all of us can use it, not only Germans) The connect script needs a couple of simple variables, the disconnect script only two. Credits: The part of connecting to the VPN appears first on http://blog.schmehr.de, a site that doesn’t exist anymore.  Feel free to give me feedback. Remember, it s my first workflow and script in apple script. Maybe you have an idea to put all the stuff in one script.
You can download the initial version of the workflow out of my dropbox: http://bit.ly/1caGM0p Furthermore, you can find a topic about that script in the Alfred forum as well.
Happy connecting 😉